A choice between nothing or nothing. 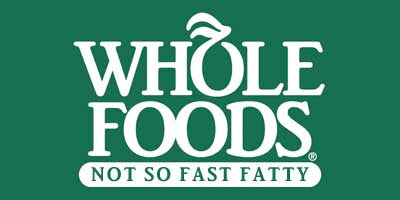 You may recall a story about Whole Foods a year ago where they bragged about a new program that would discriminate against fat employees. Basically, they set up a program that tied one's weight to their employee discount. Thin employees could get up to 10% extra off in-store purchases. For a single individual, that can easily be hundreds of dollars each year. If you're shopping for a family, it could easily be more than $1,000 annually.

Its pretty obnoxious stuff, but also old news. Still, I referenced it in a tweet a couple days ago because I was frustrated to see Whole Foods being lauded for being so good to their employees while they have an official policy discriminating against fat employees. This got their attention and I got a response from their official Twitter feed tersely telling me I was "incorrect". So, I elaborated by specifically referencing their discount program as the evidence that I was actually quite correct. They responded with:

"Sorry you feel that way but our Team Member incentive program does not discriminate against anyone....everyone can participate"

Frankly, I'm dumb-founded at how insulting a response this is. Looking at the comments of the f-word article, it also seems like they've been this insulting for a while. Because the extra benefits being given thin employees are optional, its not discrimination. That is deeply twisted logic. Fat people have no option for the extra 10% off their purchases. It is functionally invalid to claim this does not discriminate against fat people. The ability to participate in a system which will give them nothing is not a choice. It means they have a choice to get nothing or alternatively nothing. Its like they respect fat people so little that they don't even need to bother making sense when spitting on us.

So, while it may be old news, its still very actively discriminatory. I can't say I boycotted Whole Foods over this (though, I did stop going for several months). I respect the choice to do so, but I tend to feel like fat stigmatization is so taken for granted that its hard to penalize just those who are known to do it. Still, I find their justification for discrimination insulting enough that I am reconsidering. They are hardly alone in thinking fat people don't deserve the same things as thin people, but its pretty audacious to do that and then tell fat people that this isn't even harming us. The whole point is to harm us. Don't insult me and tell me this is nothing. If you can't stand by your policy of fat discrimination, maybe you should reconsider it.
at 4:48 PM 15 comments:

If you've been on the internets for more than a day, you may well have come across mention of "White Knights" or "White Knight Syndrome". Its an actual thing, but it gets widely overused online for a very specific purpose. In principal, its meant to describe men who impulsively come to the "rescue" of women. When it is actually happening, "White Knights" are generally a prelude for "Nice Guys™" where they resent that their constant rescuing doesn't produce fawning women. As an actual problem, its not about respecting women so much as belittling them.

Is this a reason male voices should never come out in support of feminist causes and in opposition to misogyny? Of course not. Usually when you see people start to chide others for being "White Knights", though, that is what they are actually talking about. Its not about shaming men for infantilizing women but silencing men who resist hostility towards women.

I've seen this phenomenon a lot where awful behavior is defended by simply labeling opposition to it as "White Knighting". Its an extremely common tactic in fat sexuality forums where treating fat women with respect is regarded as necessarily suspect by far too many. Not surprisingly, it is also common in discussions of feminism where supportive male voices are simply disappeared by dismissing them as "White Knights". Male allies rarely get engaged when they speak out against rape culture or Men's Rights Activists. We, after all, are not the point. The point is putting women in "their place" and confronting other men would just be a distraction. So there will be a quick mention of us as "White Knights" with the implication that this invalidates what we have to say to people can get back hurling threats at insults at women.

Whatever real problems "White Knight Syndrome" might create pale in comparison to the damage it serves as a tool for silencing male voices who speak out against rape culture, sexism, misogyny, and male privilege. Most male feminists aren't speaking out to "rescue" women or curry sexual favor. Most of us speak out because we recognize that men have a stake in this, too. It would be easier for men to retreat to our privilege and let this be someone else's problems but I think its important that we step up and try to be a part of the solution. Misogyny should offend men. Rape culture should horrify men. We have a responsibility to bring our voices into the discussion. Not because women need us, but because it is the right thing to do. "White Knight" accusations are always about protecting male privilege, but this isn't something men are obligated to do. There is NO necessity that we defend male privilege or fall silent in the face of violence and hatred against women. I believe male privilege is unsupportable. Aside from issues of fairness, I would still fight sexism for purely self-interested reasons. Other men treating women poorly damages ALL men and men suffer from the damage a misogynistic culture does to gender relations and our own identities. It limits us and limits our possibilities as men. That it is wrong should always be enough, but I firmly believe it does serve my interests to combat male privilege.

Speaking out doesn't make me feel like a hero. For true "White Knights", this is the problem. They do these things and expect praise. I don't deserve praise for doing what is obvious. Saying that consent should be the cornerstone of my sexual life is a low bar to have cleared. That this may ever feel significant doesn't make me feel pride. It makes me feel the need to keep speaking out. It makes me feel like we should be able to expect more of ourselves. I've gotten used to people calling me a "White Knight" to silence me, but I'm not shutting up. Fact is, this sort of cursory dismissal is far less reprisal than what women face for speaking out. It does cow some men into silence, though, and that's a shame. Men who want to speak out face so few obstacles, but often than minimal impact is enough to convince some men to just retreat to the sidelines. To any man intimidated by "White Knight" accusations into being silent in the face of hatred, I urge you to take inspiration from the women who are speaking out. Male privilege affords us the unwanted benefit of facing far less hostility when we raise our voices against those systems of privilege. Its not fair to let what little we do face keep us from take responsibility for our own lives and our voice.
at 7:48 PM 16 comments: