Maggie does a Podcast! 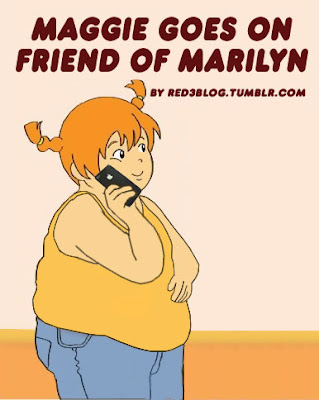 Okay, so maybe not Maggie and more me. I was honored to be invited to join the Friend of Marilyn radio show and podcast from Access Manawatu, but Maggie was the topic of discussion. Check out the October 12 episode on iTunes or RSS as I talk with host Cat Pause about the Maggie book and my appropriation of Maggie for body positive messages. I'm surprisingly happy with the discussion considering how self-critical I can be about these things. Download and listen now!

Also, check out Maggie's recent adventures from my Tumblr: 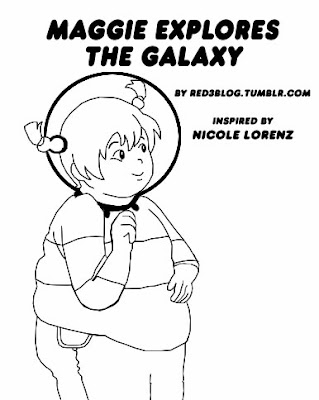 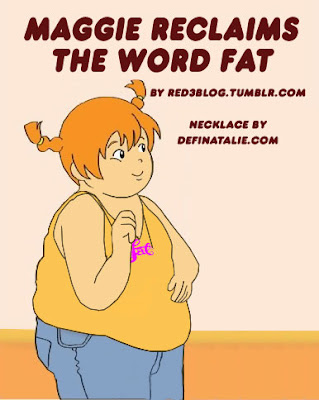 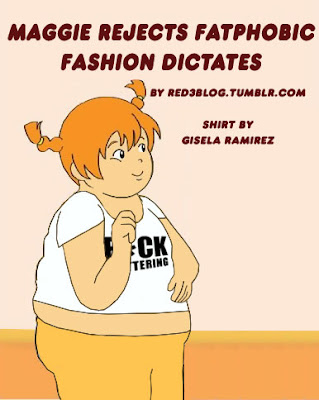 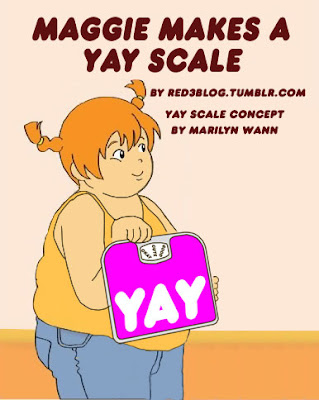 “Maggie Goes to the Beach” 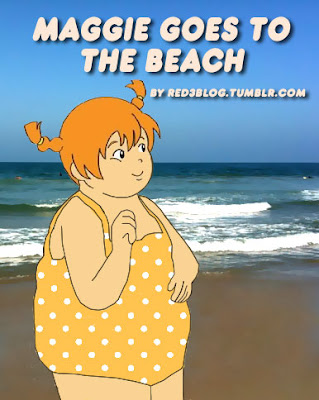 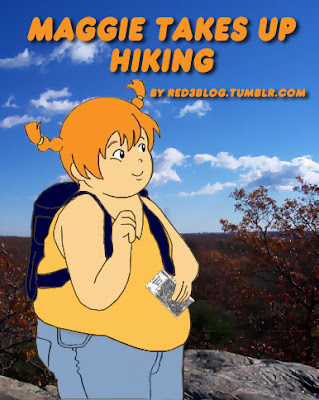 The right way to fat shame our children

Of course, there isn't a right way to fat shame our children, but that won't stop folks from trying. "Maggie Goes on a Diet" was clearly the wrong way, buts its not like people want fat kids to feel okay in their bodies. The solution? Why, semantics, of course!
You saw this dynamic a lot in the hand-wringing over "Maggie". People thought it was really important to do something about all this fat kids, but Maggie's attempt just seemed mean. Surely they could have all the shame without the guilt? Well, if there is one thing the diet industry specializes in, its guilt-free through cheap pretense. The problem with Maggie isn't its content or intent. It was the word "diet". Just take that out and everything will be okay.
Well, fat activists aren't likely to agree, but unfortunately lots of people are. The semantics around "diet" are something a bedrock in the weight loss industry. While Maggie's author clearly didn't get the script, another new book for kids gets the pretense right. Former New York City mayor Ed Koch has also written a children's book about how awful it is to be a fat child and how fat kids should really do something about that. Unlike "Maggie", Koch's book, "Eddie Shapes Up," might end up in a lot of homes and classrooms. While the celebrity author helps a lot, it also keeps to the agreed upon script.
According to reviews, the book gives lip service to ideas of there being "all kinds of bodies" and makes sure not to use the "d" word. Diet has a bad reputation, you see. Why? Well, because diets fail. Like, virtually all of the time. That's created quite a marketing problem for the diet industry. They solved it through a masterful bit of unified denial. Diets are what everyone else is selling you. Diets are what everyone else is buying. Diets are everything you did before now. Diets are never what you are doing now, because we all know that diets don't work. So Eddie doesn't go on a diet. He "shapes up" and "gets healthy".
This semantic game is played a lot. It sort of acts like a dog whistle to allow fat shaming while letting everyone feel less guilty about it. Inevitably, it gets defended with lines like "how can anyone disagree with this". Indeed, the plans often offered in these scenarios could be fairly innocuous and fat neutral. The problem is, these scenarios aren't fat neutral and that is the problem. Their proposals are secondary to their purpose. So long as the purpose is to "fight" to existence of fat children (or combat, wage war, or whatever other violent vocabulary is favored), they are still working to shame fat children. No matter what semantics they use to advance their war, that statement of purpose is what is creating the problem.
"Eddie Shapes Up" will no doubt curry favor with a lot of people who don't want to think they are shaming fat children, but still feel a deep need to wring their hands over fat kids. It'll be compared quite positively in relation to Maggie. Don't believe this hype. There is no right way to fat shame children. We don't need to teach fat shame to teach healthy eating and activity. Indeed, you can't. Because actually healthy eating and activity is not some magic that makes fat people into not fat people. It can improve health for those who desire that, but its not likely to make you weigh less. So, what do you get when you teach people those things as a means to weighing less in response to an "epidemic" of fat children? You teach them that their bodies are wrong that healthy eating and activity don't work to fix it. Every time someone self-righteously demands to know how I can be against this sort of thing, I have to think, "How can I not be against it?"
We need to move past fat shaming and fat stigmatizing if we actually care about the health and well-being of our children, both fat and thin. All kids should learn that all bodies are okay. None of the exceptions and qualifications so often tacked on. No matter the content of one's proposals, so long as its being taught under the banner of fighting childhood "obesity", then its just a pretense.
at 10:00 PM 2 comments: