ALL fat bodies are made into a public concern

Its not discrimination if I think its wrong for everyone!

In reading some of the discussion around L Word actress Leisha Hailey being kicked off a Southwest Air flight for kissing her girlfriend, I was reminded of a favorite defense trotted out in favor of discrimination. "But I think publicly kissing your partner is wrong no matter what your sexuality!" Indeed, its Southwest's defense here, too. Its not the sexual orientation, its the behavior. There is roughly no reason to ever take this sort of line seriously.

Its a pretty common tactic and that's what we need to recognize. This is a tactic and even an earnest proponent of it references it while willfully ignoring the larger social context. They think if they, individually, are willing to apply something to everyone, that's a get out of prejudice free card. That doesn't really work on a personal level, and it is pretty much insulting on a cultural level.

I'll take the cultural level first, because, well, it's low-hanging fruit. Trotting out this kind of "well, I'd discriminate against everyone" line in response to instances of discrimination is just an attempt at derailing. It doesn't matter why you'd do it. What matters are the systems of discrimination. By centering the discussion on your hypothetical motives, you just seek to distract from focusing on the larger social issues at play. You make something about you which isn't remotely about you. The reality is, your supposed even-handedness isn't what is happening in our culture. When gay people are scolded for showing affection, there is no counterpart among straight couples. Straight couples aren't being thrown off airplanes for kissing. Thin people aren't subjected to ridicule for eating in public. Men aren't viciously denounced for being sexually assertive. Your standards aren't the point, because your standards clearly aren't what's happening.

I feel this generally fails on the personal level, too. All too often, "but, its wrong for everyone" thinking only ever comes up when its wrong for the group society agrees its wrong for. Its essentially a hallow claim. You protest that you'd feel the same way if this were happening to a socially privileged group, but you never have to worry about that because it never will happen to a socially privileged group. Its just something to make you feel better about cheering for the stigmatization of marginalized groups.

The fat community sees this played out a number of ways. I suspect the most recognizable would be the fashion policing of fat bodies. Fat people are often scolded for their clothing choices by people who insist they'd find it distasteful on any better. Not coincidentally, though, they only ever voice that disgust with fat people for whom it is culturally protected to scold and demean for their bodies. They love claiming their prejudice is without regard for body size, but they never question their own actions and how even-handed they actually are when directly scolding people. They might like to think it and maybe they'd snark at celebrities, but I've seen little reason to think these people are seeking out thin bodies to police at the rates they are seeking out fat bodies. People like claiming they think its wrong for everyone, but the next time you hear someone say that, ask them to demonstrate that thinking in action. They like saying that to scold marginalized people, but how much time are they actually out there being publicly outraged when privileged people do it? I doubt many would even pass that test, much less be able to justify the recentering aspects of that position that draw attention away from social discrimination.
at 2:07 PM 9 comments:

So, by now, I'm sure you've become aware of a rather awful book aimed at children called "Maggie Goes on a Diet". The book depicts a teenaged girl who is bullied for her size and then goes on a diet and becomes thin and popular. While the protaganist is 14, the book's target audience is actually girls as young as 6. The cover depicts fat Maggie holding a dress in front of a mirror with her thin reflection looking back at her.

So, yeah, pretty much a horrible, horrible thing. Its been getting widespread condemnation, which, of course, means even people who think fat people don't deserve respect think this goes too far. The imagery of the cover really struck me for how tactless it is. It reinforces so many notions of there being thin people just waiting to come out of our fat bodies, a cliché which mostly serves to dehumanize fat people. We aren't actual people, just something covering up thin people. While a lot of mainstream critics were blandly attacking the book for not promoting fat stigma the right way, I kind of kept thinking to what happens after the book.

See, most fat people have dieted and lost weight in their lives. Maggie's story is one I've heard time and time again in fat accepting communities. Growing up fat and getting teased. Finally being able to maintain a low weight for some brief period of time before the inevitable swing of weight cycling brings their size up higher than it was to start. Indeed, its a cycle most fat people experience over and over. Maggie's story rings true to many fat people. Its just not the whole story.

So, as I had been dabling with Tumblr, I saw an opportunity for an art project and several weeks ago started posting my own book covers for sequels to Maggie's first story. Starting with "Maggie Gains Back the Weight and Learns to Accept Her Body": 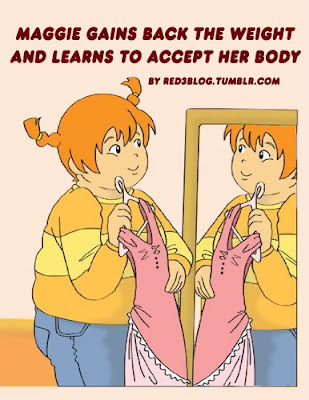 Whether fat haters like it or not, gaining back the weight is next chapter of virtually ever diet success story. Not because Maggie failed or wanted to gain back the weight, but because dieting is a failed system. I did this pretty quickly in Photoshop, but it got a very nice response on Tumblr and I solicited suggestions from folks on Twitter. I got quite a few great ones (many of which I haven't gotten to, yet) of what else Maggie could do to empower herself. @FatandtheIvy had a particular good one which lead to my next Maggie sequel, “Maggie Gets a Master’s Degree in Gender Studies”: 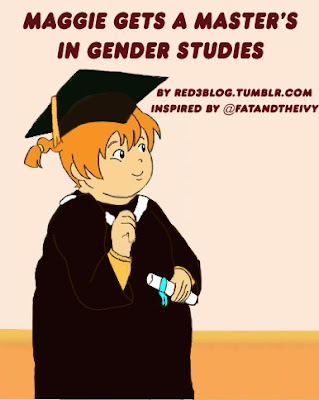 As I continued making these, I've tried to avoid putting too much baggage on Maggie. She's really meant to be an "every fat woman", so I want people to feel free to envision her whatever they like. As far as I'm concerned, she's female presenting, relatively fair-skinned, and has red hair either by nature or design. Anything else, feel free to imagine. She can be cis or trans. She may be queer or straight or ace. I try not to even think of her as necessarily white, though I presume that was her original creator's intention. She's not pale, after all. I've known people of Latin America, Middle-Eastern, and Asian decent with similar coloring. I've clearly decided that Maggie is not bound by her original creator's intentions and I'm trying to recognize that she need not be bound by my own, either. Maggie is all about possibilities and the possibilities available to fat people are far more numerous than we are often led to believe. Yes, Maggie went on a diet. That just gives her something in common with nearly every fat activist out there. She, like every other fat person, deserved more than for that to be the whole of her story.

So, because not everyone follows me on Tumblr or Twitter, here are the continuing adventures of Maggie as she subverts her diet propaganda roots and empowers herself: 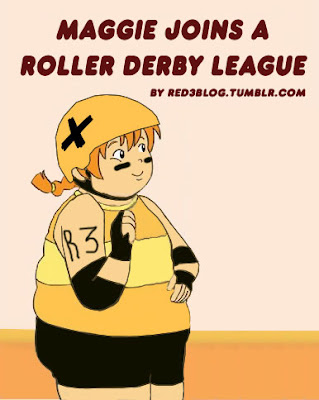 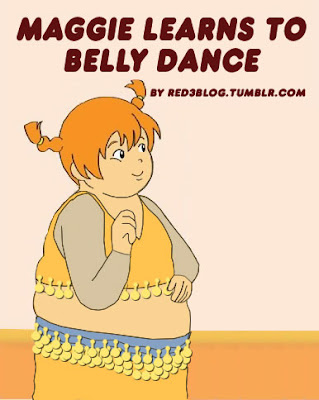 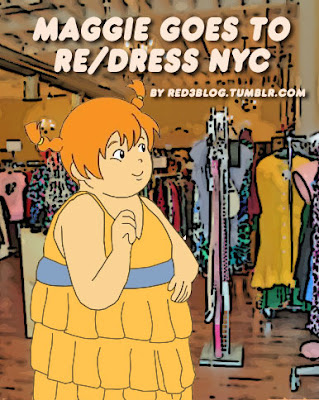 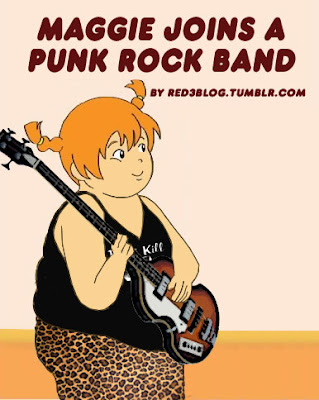 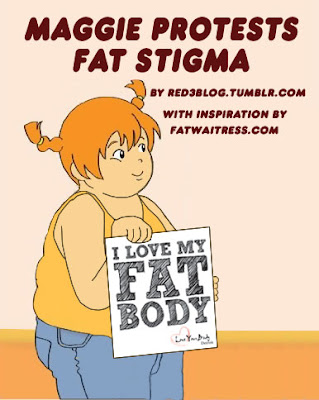 If fat people were preventable, why are there so many fat people?

Its notable that anti-fat crusading celebrity chefs have shifted to talking about "preventing" fat people. Its a tacit admission that there is no safe, reliable way to make a fat person into a not-fat person. Which in the minds of fat-haters just increases the imperative to prevent us. Stop us before we fat! Not that this relieves any stigmatization of actual fat people as they focus on the potentially fat.

If anything, it makes it much worse as we're now a cautionary tale complete with an utterly made-up statistic of fat people costing "$10,273,973 per hour". Imagine if that song from from Rent had a chorus of "How about... the supposed economic impact of the continued existence of fat people." As a Shakesville commenter notes, this highly specific number is clearly derived from a far less specific $90 billion a year number. Basically, if you take $90 billion and divide it by the number of hours in a year (8,760), and then round up to the nearest whole dollar, you get their figure. They took a broad statistical estimate (prone to all of the usual manipulations that come with estimates based on assumptions which presuppose what you want to believe) and broke it down to the hour to make it seem more authoritative.

Still, we get back to the essential question here, if fat bodies can be prevented, why are the so many fat bodies to use as cautionary examples? Why has Jamie Oliver and those who have come before him failed so triumphantly to prevent fat people? The prevention and elimination of fat bodies has been a medical imperative for decades. Stigmatization of fat bodies is enforced through massive amounts of social shaming from family and peers and authoritative shaming from medical professionals. If fat people were preventable, everything ever done by those trying to prevent them has been a spectacular failure.

In his petition, Jaime Oliver says we must "demand better" from our UN Representative. I'm not sure what he thinks better will be exactly. He's already gotten the whole structure of our society behind him. Its a rather massive degree of entitlement for people who already run the world to be demanding more. But such is thin privilege.

You're damn right, Jamie Oliver, that we should demand better. Better than you. Better than self-promotional marketing campaigns that will do far more the elevate the global brand of a celebrity chef than improve the life of one fat person, much less make anyone thinner. We need to demand options to improve our health and well-being that are not fixated on making our fat bodies not fat. We need to demand that health stop being an issue of right or wrong, good or bad. We need to stop shaming people for their health concerns and valorizing those who do "right". We need to stop the endless repetition of failed directives and stop predicating medical treatment and medicinal shaming on the size and shape of our bodies. Fat people deserve better. We demand better.