A Cure for All

This afternoon, Susan B. Komen for the Cure, our nation's most prominent charity in the fight against breast cancer, made the shocking and appalling decision to pull all of its grants for breast cancer screening from Planned Parenthood. The rational is a sham investigation by House Republicans who have made a political agenda out of withholding all financial support from Planned Parenthood's women's health programs because the organization separately provides access to abortion services. This excuse is a barely disguised fraud intending to suggest Komen for the Cure is not taking sides, while they are actually doing exactly what one side wants. It is a craven and heartless deception which has not gone unnoticed by the thousands who have protested on Twitter an inexplicable decision that will put lives at risk.

I stand with these protesters in disgust with an organization that has opted to play politics with cancer prevention. There are many who disagree with some of what Planned Parenthood does, as is their right. There are plenty who disagree with some of the activities of some of the religious organizations that Komen for the Cure also supports. For decades, we have found a way to come together and work towards a common goal of providing better access to cancer screen, care, and research. Today, Komen for the Cure has taken a despicable stand against common cause and have instead opted to endorse divisive politics over people's health.

Most of this country rejects this kind of alienating action. Most of this country believes that there are things we can all work together on. Fighting breast cancer is a noble goal, something that can unite us all in fighting for a better world. We must all stand against those who think we should only fight cancer so long as it is politically convenient. That we must only fight cancer in the way one political agenda approves of. That we all must live under the limitations of a few. We all stand together for a cure and we stand against those who would limit the cure based on political agendas.

Komen for the Cure is acting because of the voices of the few have been weighted above the rest of us. Komen caved because some people promised to withdraw their support if their politics didn't limit Komen. It is time for the few to stop dictating terms to the many.  It is time that corporations and foundations think twice before consenting to the limitations the few wish to impose on them. It is time that the rest of us be heard and for the charade of "not taking sides" while doing the bidding of one side be challenged.

We must call upon the corporate sponsors and partners of Komen for the Cure to redirect their much appreciated support to groups who do not put politics over fighting cancer. Groups who are fighting for a cure for all. Continuing to support Komen for the Cure now means supporting politics over cancer screening. It means supporting some, not all. If an organization will support such divisive politics on such a grave issue, they will not enjoy my support and I will make my voice heard. My voice will not be alone.
at 8:19 PM 4 comments:

I am the 95% of dieters who regain the weight. 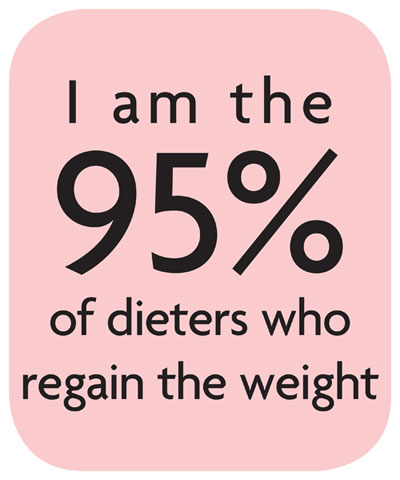 I am the 95% of dieters who regain the weight.

I didn't try to be part of the 95%. When I gained weight in college, I was struggling with accepting my changing body but also knew that dieting wasn't an answer. But then one summer I got very ill with a drug-resistant Strep infection and was basically on an extreme diet for 4-6 weeks when I could barely keep down food. After putting on about 50 lbs over a year, I lost it all in a month. When I recovered, though, the weight came right back on and then some. My weight stabilized after about a year and remained fairly stable for the next decade with a natural fluctuation of about 15 lbs up and down.

There is an old saying in Fat Acceptance that losing weight is as easy as holding your breath. Keeping it off is as easy as continuing to hold your breath. Dieting has breed a myth of its success off the fact that its not hard to induce weight loss. This period of "success" is what convinces dieters that its their fault when the diet fails. The truth is that the diet failed and was always going to fail. When I did might sound extreme, but its actually tame compared to some commercial diet plans. Even the most pseudo-reasonable "lifestyle change" relies on a fundamentally unsustainable formula. Sooner or later, we need to breathe. The diet industry, though, thrives on sustainability. Every time a diet fails, that's just a new customer. More billions to make off of peddling fat stigmatization.