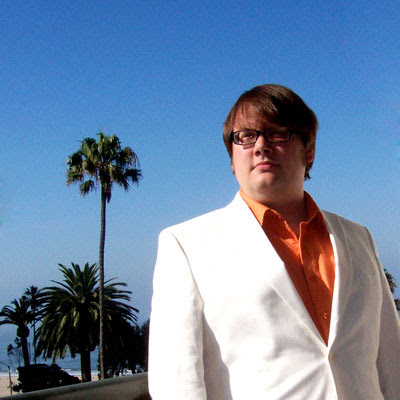 So, this is going to be a bit of fatshionista post from a fat male perspective. I doubt most people who know me realize how much attention I give to clothes. I actually spend a lot of time trying to look good, though because my style is generally casual and I lack some basic styling skills/instincts, it probably doesn't come off as much. One thing I do know how to wear, though, is a suit jacket. I absolutely love how I look in a jacket and have recently decided to start dabbling in sports jackets.

One look I've been dying to try for years is an all white style with white slacks paired with a white sports jacket. I've always thought the look was very cool but its been tough to find white slacks in my size. I recently got some from The Gap, though, and have paired it with a new white sports coat from Men's Wearhouse. This past weekend I wore the ensemble with an orange linen shirt to a cocktail party before a wedding and I'd like to think I pulled it off. 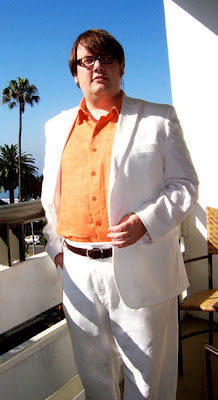 The sleeves are still too long as I didn't have time to get it tailored and it was close enough to wear. The pics are all taken with a timer, so they aren't the best, but I thought they were worth sharing. 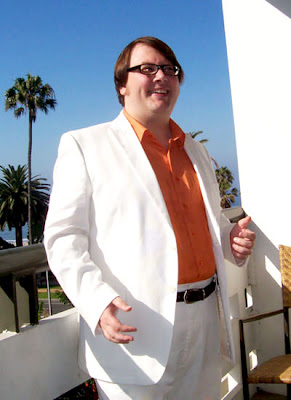 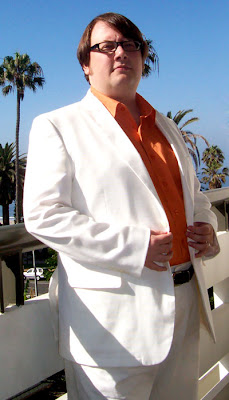 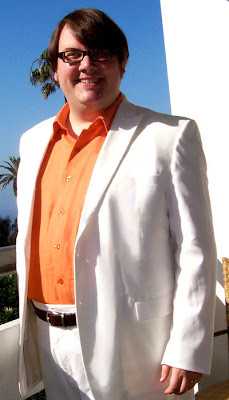 Wearing white like this definitely made me feel very on display. I wonder if the reason fat people aren't supposed to wear white is less that its "not slimming" and more because it just stands out and fat people aren't supposed to do that. Black, thus, is slimming more for letting us blend in than for its actual properties which I always felt overstated. I took some pictures of me in a dark suit that I wore for the actual wedding and I feel like I look much bigger in it than wearing white.

But for all of the apprehension I was feeling, I got over it quickly. I was noticed, but at least the comments were good. At a wedding a week earlier I also ventured to wear the white ensemble (albeit with a blue shirt/tie combo that frankly looked WAY better, I just didn't get many pictures), my wife and I were referenced as "that fashionable couple" by a friend of the bride's and frankly we were. Perhaps my wife more than I, but I still regarded the experiment in white as a success.

So, fat people can look white and look kick ass doing so. Now I'm all set to cos-play as a fat Gideon Graves from Scott Pilgrim. But fat cosplay is a WHOLE 'nother topic I'm entirely ill equipped to cover.
at 3:15 PM

You look excellently excellent. And I hope you do do the cosplay. Costumes are fun :-)

I really like this outfit and the photos are just really great in general.

I've recently started wearing white, and I feel like an angel in it. A badass, fatty angel, but an angel all the same.

And really, isn't it about how you feel?

You look gorgeous. White it up I say!

definitely a good look! and, like you said, it'll be even better when you get those sleeves taken up a few cms. nice header, too!

Brian, you look spectacularly spectacular - suits you down to the ground. For years I'd wanted a white wool coat and my family talked me out of it saying it would make me look terrible. After seeing Anne Hathaway rock one in The Devil Wears Prada, I bought one for myself, and I wear it ALL the time, and feel like hot stuff in it! :-D

Hey! Pictures. Great outfit. You look very handsome. The orange shirt looks good and is kind of daring, as well.

You totally rock the white outfit and I love a fat man with a sense of style, just ask my husband! Glad to see you have opened up comments too!

You look really good! I love white with a passion even if, as you, I've been told that I was not supposed to wear that. You look very classy and you seem to be at ease with your style. You go !

Handsome and well put together!

You are a very good lookin' guy!

Continuing thanks. I might think about other male fatshionista posts if I can think of worthwhile points/photos to offer.

I stumbled across you from BodyLoveWellness' link to this post and I just wanted to say I love it! You totally rock that suit and I'm inclined to agree with you on the whole "black is slimming because you blend in" thing.

Nice suit! I obviously haven't been back in a while b/c site looks completely different to.

I envy your ability to wear white without ending up looking like a dish cloth covered in stains, which is what happens to me when I wear white!

You rock it well!

Looks fantastic! I avoided white for years because of the old saw about fat, and when I finally gave in, I found out I actually look pretty good in it. That said, like Sleepydumpling, I fear for keeping it clean while living life the way I do. :-)

Love the new blog look, btw. Been a long-time reader.

*pounce-cling* O my god! You're so awesomely hot!

Love the outfit and the whole look - very stylin'! Also, you look SO much like a celebrity in that first picture, but I can't think of who I'm thinking of. I hope it comes to me, because I have been driving myself nuts trying to remember.

@fatbodied - are you thinking of Colin Meloy (of the Decemberists)? That's who I thought of: http://www.gettyimages.com/detail/85035579/Redferns

@Brian - nice look. I love the white and orange combo!

I personally think you look fantastic. And I myself being a fat girl, love wearing white. When my skin has a bit of tan color from working in the sun, white stands out beautifully. Who cares whether the white dress is a size 2 or a size 22?

You do look great!

@fatbodied: I also had the same feeling as you. Could you be thinking of Jason Schwartzman? Brian reminds me of him a bit, especially with those glasses. (That's meant as a compliment, Brian! I like Schwartzman and think he's talented and good looking.)

@Brian: Oh, and I forgot to mention: I think the orange shirt is awesome with your white shirt. It's totes cool, funky, and fashionable.

Duh--I meant "suit" not "shirt" in my previous comment...

Very sharp! It feels like it could use a little something to accessorize and help it pop - maybe a coordinated pocket square, or a lapel pin?

Also, I love orange. You are rockin' the shade, and it looks good on you.

[OpenID and LiveJournal are not playing nicely together today, it seems. I'm Lexica510 over at LJ, not really trying to be Anonymous.]

Continuing thanks for all of the nice comments. My ego is in your debt.

@Indy Funny you should mention Schwartzman. When I suggested cosplaying as a fat Gideon Graves, that's actually a character Schwartzman is playing where he rocks a white jacket. Here is a pic.

@Lexica510 Good thought on a pocket square. I usually stay away from pocket squares, but they would probably work well with the white jacket.

Lookin' fine, sir. I love the white on you, and I also admire your ability to wear it without getting covered in stains!

I was talking with a friend just recently about how fat men might actually have a tougher time dressing sharply than we ladies do, because you simply have fewer options. But you are living proof that it *can* be done.

I was a bit on the fence about the black belt (do men's belts even come in colors??), but I've decided it makes a great accent, especially with your stylish black glasses.

Pulled it off? I'll say! You look wonderful.

I think you look excellent, sir. I'd go as far as to say you even look... sexy. (I know that's taboo to say, but seriously, you look great, and the orange is cool.)

I think men have options for black, brown, and white in belts. And as a fat man, I've NEVER seen a white belt in my size. I think the standard for men is to match the belt with the shoes and as I could only bring one pair with me to California, It had to be black to match my other suit. I might prefer brown with the white, but I also need a belt that doesn't sit weirdly in those pants.

I think you might have a point about it being tougher to find fashionable clothes as a fat man. I'm the male equivilant of an "in-betweenie" (well, maybe not anymore) which opens up a lot but I really don't know what I'd do if I was just a little bigger. I've been trying to get sports jackets from The Gap for a couple years but I hate everything I've gotten at least in part because the fit is awful. At the same time, though, there is less expectation for men to be sartorially gifted anyway so it may be a difference without significance. I imagine if it was more important, there would be more communal advice and market options as there are for fat women. But this may be a whole 'nother poster.

Brian you could always opt for non-leather belts. I've seen some great ones in canvas, hemp, flax and stuff that can be dyed to any colour you like. Though they are usually expensive, designer belts. A friend of mine has one in a white, khaki and orange design that looks great with his chinos or cargos.

I like that outfit. For an Alice in Wonderland themed prom, I dressed as the Cheshire Cat and my friend R- tall and big in a fat Viking sort of a way- was the White Knight. He wore a white suit with a white vest, white shirt, and a shimmery white tie. It looked awesome. Don't ever let anyone tell you you can't wear white!

I'm desperate to get a white vest, but I haven't found one that fits me, yet. Well, I supposed I have one for my tuxedo, but not quite what I'm thinking of.

Not that you should care what I think, but: Hot! When you "stand out" by wearing white you are saying "I like my body just fine thank-you (and if you're lucky maybe you can too)." It's always the right choice. I agree with Lexica510 about accessorizing, and I am hoping that underneath one of the sleeves is a big heavy watch...

You look really good in white. You look cool in both meanings of the word. A white suit is so very sophisticated looking. It makes you look like a man of the world. :)

I'm an old lady so I recall a time when my elders from yet an even older day called a suit like that an "Ice Cream Suit."