On Friday, I posted a graphic on my Tumblr that visually represented the difference in search results between "fat acceptance" and both "dieting" and "weight loss". The difference was very stark and was meant as an illustration of the marginalization of fat acceptance for those who routinely look at the world portrayed in this pictures and complain about how the red leaves no room for the gray. 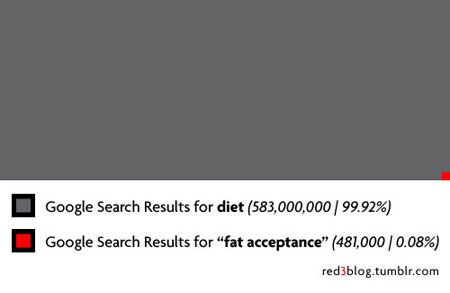 Two of my readers responded to note with alarm that when they searched "fat acceptance" on Facebook, it gave dieting results. When I first read this, I took this to mean that they permitted dieting results to be catagorized with fat acceptance, or perhaps more likely the reverse. I was alarmed to discover it was actually much worse.

As of Saturday night, when you entered "fat acceptance" in the search bar on Facebook and pressed enter, Facebook redirected you instead to a page about dieting complete with a stock photo of a scale. I posted about this on Tumblr, and people quickly protested to Facebook only to discover the actual page on fat acceptance was, itself, replaced with the content of the dieting page. I think complaints have stopped the redirect, but as of this morning the content of "Fat Acceptance" was still copied from a Dieting article. This kind of erasure of fat acceptance is appalling and entirely intolerable. So, naturally, what happened next were a handful of people insisting we needed to tolerate this.

Some were naked in their bigotry. It wasn't a problem that fat acceptance was being so literally disenfranchised because fat acceptance doesn't deserve to be. This is predictable, sadly. Unfortunately, so too were the hordes ready and eager to not simply excuse Facebook for having this on their site by to mock us as stupid for even being upset by it. We had no right to blame Facebook.

See, I thought the fact that this search result come through Facebook's own site and had their logo right at the top of the page and their site in the URL all tended to point to Facebook's accountability, but that was obviously foolish of me. You see, Facebook simply took this content from Wikipedia and someone on Wikipedia had "vandalized" the fat acceptance page to redirect to dieting.

I mean, I already figured this out. The page says its from Wikipedia. This struck me as the likely sequence of events. I just fail to see how this excuses Facebook. But then, I don't think oppression only matters when its done with malice.

This is a distressingly common belief from persons with privilege who want to police the outrage of marginalized groups. They seek to maintain and enforce their privilege by denying as much oppression as possible. Unless Facebook did this "on purpose" they are blameless. It doesn't even matter that this actually was done with malice by the "vandal" who did this at Wikipedia. Heck, just dismissing that act as vandalism and not bigotry is a way of trying to define the argument to their advantage. This isn't some dynamic exclusive to fat people, of course. It never is. Think of the white people who limit outrage over racism to the KKK and feel smugly satisfied with themselves as they ignore institutionalized racism that defies a sharply defined party to blame but result from a culture of oppression.

Oppression isn't only committed by secret cabals of bigots in dark room plotting to silence the already disenfranchised. I didn't imagine that someone at the Facebook corporate office plotted this. I think they were negligent. They exploit copy from Wikipedia knowing full well of the risks its open source nature carries to allow bigots to alter the content. Everyone knows that. Facebook may not have made a choice to specifically empower these bigots, but they made a choice that empowered bigotry. Indeed, is it that hard to conceive that hate-minded people have taken the time to figure Facebook's schedule for pulling content from Wikipedia and time their vandalism to ensure the widest audience for their hate? There are so many dark corners of the internet where hateful people actually plotting to advance the cause of oppression. Those corners may not be in the corporate offices of Facebook, but that didn't stop Facebook from this negligence.

Oppression from negligence and thoughtlessness is an all too real problem and not one hard to understand when it targets you. I understand why people with privilege would want to insist that "motive" matter above all, but intent is not magic. Intent does not change the facts of what happened. Intent does not erase the harm or undo the erasure. Great harm is done in this world by those who did not intend it. Facebook may have empowered bigotry without malice, but that doesn't change the fact that they gave power and resources to advance a bigoted mission. They must be accountable for that.

UPDATE: As of Monday afternoon, June 18, Facebook has updated the "Fat Acceptance" page so it has the proper content and doesn't redirect to Dieting. That this has been corrected is welcome, but it also doesn't absolve Facebook for responsibility for empowering bigotry like this in the first place.
at 3:00 PM

If you check the edit history on Wikipedia, there was recent tampering, but it's been fixed. Facebook pulled the page while it was vandalized, and presumably won't fix it until they get around to updating their Wikipedia content. On a wiki, as soon as a vandal is found, it's fixed. That obviously isn't carrying through to Facebook's use of the content, a foreseeable consequence Facebook obviously decided not to care about.

It's still redirecting to the Dieting page for me!

It does, indeed, still redirect to the Dieting page.

This is fascinating. What a great example of how deeply ingrained in our culture that people should diet and that fat acceptance shouldn't be allowed. Bravo on finding this and compiling a little bit of data to produce two great graphics.